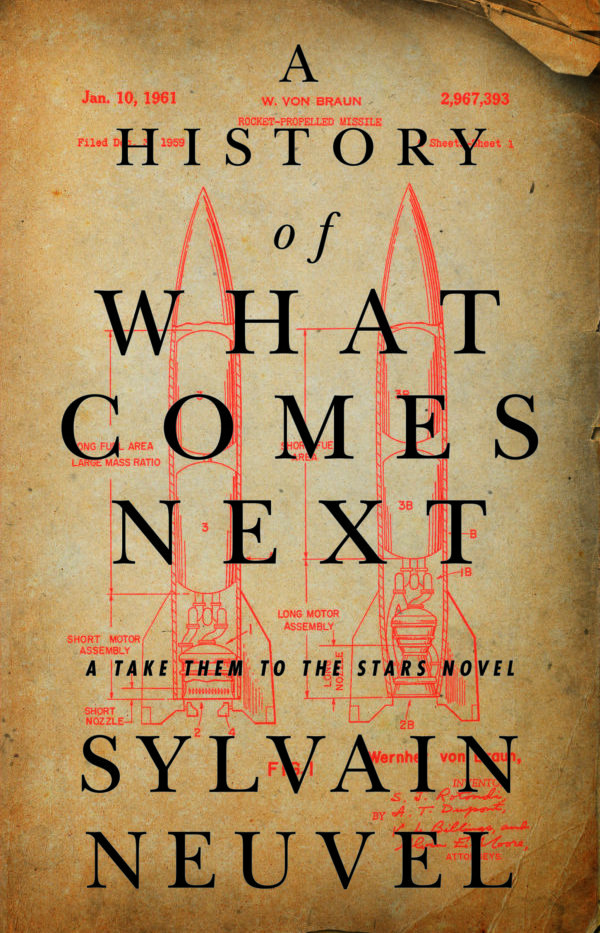 Showing that truth is stranger than fiction, Sylvain Neuvel weaves a sci-fi thriller reminiscent of Blake Crouch and Andy Weir, blending a fast moving, darkly satirical look at 1940s rocketry with an exploration of the amorality of progress and the nature of violence in A History of What Comes Next.

Always run, never fight.
Preserve the knowledge.
Survive at all costs.
Take them to the stars.

Over 99 identical generations, Mia’s family has shaped human history to push them to the stars, making brutal, wrenching choices and sacrificing countless lives. Her turn comes at the dawn of the age of rocketry. Her mission: to lure Wernher Von Braun away from the Nazi party and into the American rocket program, and secure the future of the space race.

But Mia’s family is not the only group pushing the levers of history: an even more ruthless enemy lurks behind the scenes.

A darkly satirical first contact thriller, as seen through the eyes of the women who make progress possible and the men who are determined to stop them...

Praise for A HISTORY OF WHAT COMES NEXT

“A highly crafted and unique look at the space race, through the eyes of those who exist only to ensure its success.[...] Neuvel’s intriguing first-contact story is set through centuries of manipulation and pursuit. It’s a promising start to what looks to be a dark and exciting trilogy.”—Library Journal

“This commentary on survival instincts, violence, reprehensible deals, and the toll that progress can take on people’s lives and souls will appeal to fans of provocative science fiction thrillers with well-developed characters.”—Booklist

"An extraordinary twist on the space race and a paean to what smart, strong women can accomplish. I'm always over the moon for Neuvel's stories!"—Delilah Dawson

"Sylvain Neuvel proves once again he deserves the title of the hottest new SF writer of the 21st century — and this time he does it by looking back at the storied development of rocketry in the 20th. Clever and compelling, with a succession of kick-ass heroines propelling events along via mayhem and murder behind the scenes, A History of What Comes Next blasts off on page one and will keep you enthralled until the end."
—Robert J. Sawyer, Hugo Award-winning author of The Oppenheimer Alternative